Whether you’re a dedicated rider or just take your motorcycle out for an occasional spin, very few things can stifle your enthusiasm like a dead battery.

Like any other component on your motorcycle, a motorcycle battery requires a bit of routine maintenance and care to function well. Ride frequency and weather are other factors, and will be addressed in detail below.

This article will also discuss a few tips and tricks for extending the life of your motorcycle battery, allowing you to spend more time enjoy your motorcycle and less time trying to get your machine started. Read on to learn more.

Motorcyclists tend to care for their machines more diligently than most drivers, and there’s often a love affair between rider and cycle. Motorcycles owners in many cases polish and tweak their bikes constantly, and can be trusted to maintain their machine.

That said, removing and cleaning a motorcycle battery is one of the more tedious maintenance tasks on a rider’s schedule, and something apt to be put off.

The real trick to extending the life of a motorcycle battery is to do the manufacturer’s suggested maintenance at regular intervals.

Below is a better explanation of the steps you may want to take to extend the life of your motorcycle battery:

For those who ride every day, the battery will charge continuously when the bike is running. But for those who take long breaks between rides, removing the battery and putting it on a trickle charger is an ideal way to keep the battery charged optimally.

A trickle charger is an inexpensive, easy-to-use way to extend the life of your motorcycle battery if you ride infrequently.

Every battery does a “self-discharge”, losing charge at a rate of 1-2% every day. If a bike is stored for three or four months during the winter, it may not start after you remove it from storage because the battery has become fully discharged.

This is where a trickle charger comes in handy. Trickle chargers recharge batteries at the same rate that they self-discharge, maintaining battery life at an optimal capacity.

When charging a motorcycle battery, it’s very important to open the battery’s vent caps. If you fail to open the vent caps, flammable gases can build up and potentially cause an explosion or start an electrical fire.

While opening the vent caps, you or the person maintaining the battery will want to make sure that the battery’s vent tube is also clean and unobstructed.

This article outlines most of these steps in further detail, including instructions on how to clean the battery’s vent tube, locating and opening the vent caps, and properly cleaning each battery terminal.

While many riders do repairs as needed, some are less diligent about being proactive in machine maintenance.

Like any car or truck, motorcycles require regular maintenance schedules based on certain mileage intervals.

While annual maintenance might be enough to keep your bike running, this probably isn’t an ideal interval if you’re interested in extending your bike’s battery life.

Always defer to the manufacturer guidelines on your bike’s battery, but there are some general guidelines mentioned in this article that can be followed for routine motorcycle battery maintenance.

A big way to ensure your battery functions optimally is to make sure that the battery’s terminals are clean and free of debris or build-up.

To clean your bike’s battery terminals, carefully disconnect the negative terminal first while the bike is not running. The negative contact is usually the black-sleeved terminal on a vehicle.

Place the battery in clean, well-ventilated area on a level surface. Check the terminal for corrosion.

Corrosion on the positive terminal will often appear bluish-white. This is due to a chemical reaction between the sulfuric acid inside the battery itself and the copper sulfate created by the lead terminal interacting with the copper in the terminal clamp.

Copper sulfate does not allow for good electrical conduction, and this potential leak will rob your battery of life and function.

A good way to clean the positive terminal is by using baking soda and water, as the heavily-alkaline baking soda will largely neutralize the overly-acidic copper sulfate.

There are also motorcycle battery cleaners available online and in retail stores, such as Permatex Battery Cleaner. These are your best bet if you don’t want to use natural cleaners such as baking soda. 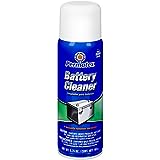 Sulfation occurs when a battery is not recharged regularly. Vehicles that spend too much time idling do not recharge properly, and this problem is compounded when a number of different electrical features draw the electrical current, further draining the battery while the vehicle or motorcycle is running.

This can also occur in motorcycles if the bike is not run for months at a time.

There are two types of sulfation: permanent and temporary. Permanent sulfation is hard, like the aggressive build-up of plaque on teeth, while temporary sulfation can be reversed with a strong overcharge.

It goes without saying that the best way to prevent sulfation in the first place is to regularly charge your battery, as noted above. But in the event of sulfation build-up, in most cases the battery can be salvaged, and preventing sulfation is a great way to extend your bike’s battery life.

While cleaning the terminals, it’s also a good idea to clean and inspect the battery clamps for corrosion or sulfation build-up. There are battery terminal cleaning solutions that can be used to clean battery clamps, but using the chemistry of alkaline baking soda to mitigate acid damage is cheaper and likely more effective.

Battery clamps are very inexpensive and, in most cases, simple to replace. Keeping high-quality battery clamps on your machine is another effective way to lengthen the life of your motorcycle battery.

Temperature and weather can actually have a big bearing on the life of a motorcycle battery.

When the weather is cold, it’s doubly important to keep your battery at a full charge, as the cold weather has the potential to wreak havoc on the battery due to its chemical composition.

The normal process for a battery is for the chemical to gradually move away from the lead plates of a battery box into the water solution.

When a battery is discharged, the opposite happens, with the chemicals moving out of the water solution back onto the battery’s lead plates. This is obviously not ideal.

If the chemicals stay on the lead plates for an extended period of time, a barrier forms and hardens over the plates, preventing the normal cycle from occurring with the same efficiency as it would ordinarily.

This video better explains the process, but in short, cold weather – as well as the natural tendency to run a motorcycle less frequently during winter months – is apt to rob a battery of its charge.

Motorcycle owners can again be proactive by purchasing a charger and placing their motorcycle battery on the charger during longer periods of inactivity or disuse.

GET THE MOST OUT OF YOUR MOTORCYCLE BATTERY

Image by Capri23auto from Pixabay

Hopefully, the tips, tricks, and suggestions listed in this article will help you get longer life from your motorcycle battery. A little bit of common sense and routine maintenance can potentially save you a good deal of time, money, and effort while letting you spend more time on your machine.

On chilly nights it's hard to beat a hot bowl of chili for dinner. It's hearty, savory, and it warms you up while it … END_OF_DOCUMENT_TOKEN_TO_BE_REPLACED

A mark of distinction in all-terrain vehicle racing history, the Honda sport ATV TRX 250R, manufactured from 1986 to … END_OF_DOCUMENT_TOKEN_TO_BE_REPLACED

Whether you’re a dedicated rider or just take your motorcycle out for an occasional spin, very few things can stifle … END_OF_DOCUMENT_TOKEN_TO_BE_REPLACED