When people mention motorcycle clubs, they sometimes hear motorcycle gangs; Hell’s Angels, Outlaws, and Sons of Silence (no, not Sons of Anarchy) are called 1%er clubs.   The 1%er club designation dates back to when someone referred to 1% of the motorcycle riding population as “hardcore” or “criminals” while the other 99% were law-abiding citizens.  There are 1%ers out there that are into “illegal” activities, but most clubs that carry the designation as 1%ers are clubs whose members are dedicated to similar principals, can only become members by invitation and then when they do become members, they are lifetime members; thus creating a strong bond of brotherhood. But, that is not what this article is about; this article is about the thousands of motorcycle clubs across the country whose members share similar interests with those who share in their passion for motorcycling.

The AMA (American Motorcyclist Association) is the largest motorcycling organization and is considered to be the granddaddy of all motorcycle clubs. The AMA has a strong affect on legislation being passed by the government, including the ever-controversial helmet laws, and the recent repeal of the lead laws forbidding the sale of dirt bikes to children because of the lead found in some parts of the bikes. They provide guidance and advice to over 1200 affiliates on having rallies and events. Mainly a club dedicated to keeping the freedom of riding a motorcycle just that, it’s easy for anyone to join and members can receive various benefits including discounts on products as well as discounted tickets to AMA sanctioned racing events and an easy way to get in touch with the government when they try to “limit” the freedom many motorcyclists enjoy.

There are literally thousands of clubs from every walk of life that allow motorcyclists to ride and hang out with their peers.  There are clubs for women only, clubs for ethnic groups, law enforcement clubs and military clubs in every State throughout the US.  Every major manufacturer has at least one club, a few of them include: Yamaha Star Club, Kawasaki Rider’s Club of America, Honda Rider’s Club of America and of course for the Harley Riders, there is the Harley’s Owner Group (known in the industry as H.O.G.).  If you don’t know where to look for a club, or are new to motorcycling, joining a club with riders of similar bikes would be a great place to start; as the manufacturers sponsor many local events and help out local dealerships by giving exclusive offers to their members. 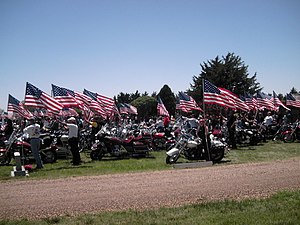 If these clubs don’t seem right for you, you can make it even more personal and close to heart by joining the Christian Motorcycle Association, a biker ministry; or Rolling Thunder, an advocate for troops missing in action or prisoners of war; and there is also the Patriot Guard Riders, those are the motorcycles we see escorting our veterans home from the wars.

There are various websites listing local clubs, their principals, membership profiles and local meetings and events. You can email members to get more information about the clubs and as always, use your local dealer as a resource; most dealerships are either affiliated with clubs or allow clubs to display their information inside their dealership.

It may take a few different meetings or rides to find the club that is right for you.  I would suggest that if you ride a Yamaha R1 and your best friend rides a Honda Goldwing, you join one of the various clubs that just label themselves as “All Bikes Welcome”, simple, but effective when looking for a group that won’t shun you for riding a sport bike while they are riding cruisers.

Ride safe and ride smart and if you have any stories to share about clubs you have joined or clubs you ride with, we would love to hear them.