Every once in a while, something comes up that is truly surprising in the laws of certain states.  Virginia has yet to pass, or even consider seriously, a law that will make texting and driving illegal, yet they are currently trying to prevent the repeal of a law that makes it illegal for two bikers to ride next to each other.

Apparently, 48 of the 50 states currently either have a law on the books allowing motorcyclist to ride two abreast, or do not address the issue at all, but Virginia is trying to keep it alive and well.

Originally enacted in 1968, it is believed that this law was passed as a way to keep motorcycle gangs in check, but since the law is so old, no one is really sure.  It makes sense that this law would have been used for a way for the local police to pull motorcyclists over, and at the time, the reputation of motorcycle riders was in question, however, what purpose does it serve today?

Some people believe that two motorcycles riding next to each other can create a disaster should one of the riders come across some debris that requires a quick move in one direction of the other.  Yet, bicyclists can ride next too each other, they can create an accident just as easily avoiding road hazards.  The headlights of two motorcycles next to each other can actually help illuminate darkened roads for riders to see the roads better.

Ironically, motorcycle safety courses teach riders to stop next to each other at stoplights; police officers ride next to each other to communicate; and many charity rides are usually done in formations of two.  Even the ride for the missing or imprisoned soldiers must be done in single file when riding through the state of Virginia.

Laws are written for the safety of the public, but at some point, lawmakers need to set aside outdated laws and direct their attention towards current issues (like texting while driving).

Did you ever get a ticket or traffic violation for driving next to someone else on a motorcycle?  Share your story and help a fellow rider from getting a ticket. 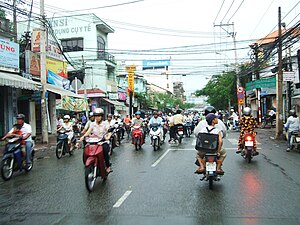 On chilly nights it's hard to beat a hot bowl of chili for dinner. It's hearty, savory, and it warms you up while it … END_OF_DOCUMENT_TOKEN_TO_BE_REPLACED

A mark of distinction in all-terrain vehicle racing history, the Honda sport ATV TRX 250R, manufactured from 1986 to … END_OF_DOCUMENT_TOKEN_TO_BE_REPLACED

Whether you’re a dedicated rider or just take your motorcycle out for an occasional spin, very few things can stifle … END_OF_DOCUMENT_TOKEN_TO_BE_REPLACED